The best music schools in the US all share a few things in common, according to the QS World University Rankings by Subject. They are generally research-intensive institutions with a strong reputation among academics and offer specialist degree programs at the postgraduate level (typically at least a master’s degree). They also have impressive scores when it comes to the Employer Reputation indicator. We have created a 2022 ranking of the best colleges in the world and in New York City that offer Music degrees to help you find a school that fits your needs. 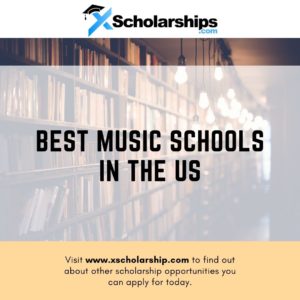 18 Best Music Schools in the World

The Juilliard School is a private performing arts school located in New York City, United States. Established in 1905, the school trains about 850 undergraduate and graduate students in dance, drama, and music. It is widely regarded as one of the best Music Schools in the US and dance schools. The Juilliard School is a performing arts conservatory located at Lincoln Center for the Performing Arts on the Upper West Side of Manhattan, which offers various dance, theatre, and music programs through undergraduate and graduate studies.

The Curtis Institute of Music is a conservatory located in Philadelphia founded by Mary Louise Curtis Bok Zimbalist. It was established on November 13, 1924, and opened on September 15, 1925, with only seven students. The institute is ranked among the top conservatories in the world for producing some very famous musicians like Lang Lang and Samuel Barber.

The Department of Music’s graduate program at  Harvard University provides advanced instruction in historical musicology, ethnomusicology, theory, composition, creative practice, and critical research, leading to a PhD in Music. Separate from these PhD programs, there is no admission to an AM program. Students who fail to pass the general test may be given the option of completing the criteria for a terminal AM degree in exceptional circumstances. This is not only why it is one of the best Music schools in the US.

The Yale School of Music is one of Yale University’s 12 professional schools. Master of Music (MM), Master of Musical Arts (MMA), and Doctor of Musical Arts (DMA) degrees are available, as well as a dual Bachelor of Arts—Master of Music program with Yale College, a Certificate in Performance, and an Artist Diploma. Yale is the only Ivy League school with its own music school. It is regarded as one of the best Music schools in the world, with a 6-8 percent acceptance rate. It has a total of 200 students.

The Manhattan School of Music (MSM) is a private music conservatory located on the Upper West Side of Manhattan in New York City. This school is providing its students with the best music education available. Bachelor’s, master’s, and doctorate degrees in classical and jazz performing and composition and a bachelor’s in musical theatre are available at the institution. The school, which was founded in 1917, is located on Claremont Avenue in New York City’s Morningside Heights area, near Broadway and West 122nd Street (Seminary Row).

Until Juilliard moved to the Lincoln Center district of Midtown Manhattan, the MSM campus was home to The Institute of Musical Art (which ultimately became Juilliard). The Manhattan School of Music provides its students with a wide range of live audience performance opportunities. There are 132 practice rooms and 8 performance places on the premises. The Three Primary Orchestras Are the MSM Symphony, the Philharmonia, and the Chamber Sinfonia. In addition, for orchestral chamber music, various smaller ensembles are played throughout the year.

The overall acceptance rate for undergraduate students is around 25%, and it is around 30% for graduate students. Acceptance rates, on the other hand, differ significantly between programs. There are approximately 200 new students in each freshman class. During each semester of their studies at the institution, students in the majority of degree programs are expected to engage in an ensemble. Participation in various ensembles may be mandatory depending on the student’s degree program. Auditioning is required for the majority of groups.

The USC Thornton School of Music is a Los Angeles, California-based private music school. The Thornton School, which opened four years after the University of Southern California, is the city’s oldest continuously operating arts institution. The university is located on the USC University Park Campus, which is located south of Downtown Los Angeles. The Thornton School is known for combining traditional conservatory rigors with a forward-thinking approach to preparing the next generation of musicians. Internationally renowned, the institution is usually recognized as one of the top ten music schools in the United States.

Thornton was one of the first music institutions in the country to provide a music industry undergraduate curriculum, which is still recognized as one of the best in the country, and now offers both a Bachelor of Science and a Master of Science in Music Industry. Thornton is the only school that offers a full television and film scoring program. It also offers a studio guitar performance program.

The Royal College of Music is a conservatoire in South Kensington, London, England, founded by royal charter in 1882. It offers training in all aspects of Western music, including performing, composition, conducting, music theory, and history, from undergraduate to PhD levels. The RCM also conducts research with a focus on performance science and performance practice. The college is a member of Conservatoires UK and one of the four conservatories of the Associated Board of the Royal Schools of Music. Its structures are located on Prince Consort Road, right across from the Royal Albert Hall, near Imperial College, and among Albertopolis’ museums and cultural centers.

From undergraduate to doctoral level, the college teaches all aspects of Western classical music. 300 youngsters aged 8 to 18 are educated in the junior section on Saturdays. Since August 2011, RCM has collaborated with Singapore’s Nanyang Academy of Fine Arts to offer a Bachelor of Music (Hons) degree that both institutions jointly award.

The Royal Northern College of Music (RNCM) is an internationally renowned conservatoire in Manchester, England. It is one of four conservatoires affiliated with the Royal Schools of Music’s Associated Board. RNCM is one of the UK’s busiest and most diverse public performance venues, in addition to being a center for music education. The college currently provides undergraduate (BMus and joint MusB/GRNCM course with the University of Manchester in any of the five specializations offered) and postgraduate (PGDip, MMus) teaching programs in musical performance and composition.

The college’s Graduate School, in collaboration with Manchester Metropolitan University, offers research degrees (MPhil, PhD) in musical performance, composition, musicology, and music psychology, as well as awards at the Companion, Fellowship (FRNCM), and Member levels. The college is separated into six schools based on their fields of study.

ALSO CHECK OUT:  The Top 15 Best Acupuncture Schools in the US

Within its Graduate School, there is also a School of Conducting.

Faculty teach all courses with an average class size of fewer than thirty people. Fundamentals of Music, Music Theory for Non-Music Majors I and II, and Music Literature for Non-Music Majors I and II are among the few courses available to all Rice University students (without additional entrance requirements). About thirty students are enrolled in the voice and opera department, which produces two operas each year. The Shepherd School has a competitive admissions process. About 10-15% of graduate candidates and 15% of all undergraduate students are accepted at Shepherd.

The Cleveland Institute of Music (CIM) is a private music conservatory in Cleveland, Ohio. The conservatory, which was founded in 1920 by Ernest Bloch, now has a current yearly enrollment of 325 students, with around 1,500 students engaged in preparatory and continuing education programs. Approximately 100 positions are available each year, for which 1,000-1,200 students apply. Many members of The Cleveland Orchestra are faculty members of CIM, and CIM alumni can be found in major orchestras all around the world.

University Circle is a four-mile square neighborhood on Cleveland’s east side, where CIM is located. The main structure, which first opened its doors in 1961, comprises teaching studios, practice rooms, concert halls, a music library, and classrooms. In 2007, the structure was expanded to accommodate 34,000 square feet of space. A new foyer and lobby and an enlargement of the music collection, a new recital hall, recording/broadcast suites, new practice rooms, and extra administrative offices, were all part of the project.

The Johns Hopkins University’s Peabody Institute is a private conservatory and preparatory school in Baltimore, Maryland. It is the oldest conservatory in the United States, having been founded in 1857 and opened in 1866 by merchant/financier and philanthropist George Peabody (1795–1869). Its recent decades-long affiliation with JHU, which began in 1977, allows students to conduct studies across fields.

George Peabody (1792–1869) established the institute with an endowment of approximately $800,000 from his fortune, which began in Massachusetts and was later augmented in Baltimore (where he lived and worked from 1815 to 1835) and vastly increased in banking and finance during subsequent residencies in New York City and London, where he became the wealthiest American of his time.

The Civil War delayed the completion of Edmund George Lind’s white marble Grecian-Italianate west wing/original structure housing the institute. It was dedicated in 1866, with Peabody himself traveling across the North Atlantic Ocean to speak at the dedication ceremonies on the front steps of the landmark Washington Monument circle in front of a large audience of notaries and citizens, including hundreds of Baltimore City Public School students.

The New England Conservatory (NEC) is a private conservatory in Boston, Massachusetts, United States. It is the oldest independent school of music in the United States. Founded in 1867 by Eben Tourjée, it is located on Huntington Avenue at Symphony Road in the Fenway-Kenmore neighborhood of Boston.

Berklee College of Music, located in Boston, Massachusetts, United States, is the largest independent college of contemporary music in the world. Known for the study of jazz and modern American music, it also offers college-level courses in a wide range of contemporary and historic styles, including rock, hip hop, reggae, and salsa.

The Colburn School is a Los Angeles-based private music school that focuses on music and dance. The Conservatory of Music, Music Academy, Community School of Performing Arts, and Dance Academy are its four sections. It is across the street from the Walt Disney Concert Hall and close to the Museum of Contemporary Art. Students can earn a Bachelor of Music degree, a Master of Music degree, a Performance Diploma, an Artist’s Diploma, and a Professional Studies Certificate at the Conservatory of Music, which was founded in 2003. The Conservatory provides a complete scholarship, housing, and stipends to all of its students. Lee Cioppa is the Dean of the Conservatory.

The Music Academy was founded in 2010 and provides a broad range of courses, including music theory, ear training, voice, and a vibrant chamber music program for exceptional young performers. Adrian Daly is the Dean of the Academy.

Cole claims that great music institutions train pupils to be outward-focused artists. On the other hand, outward-focused programs encourage students to consider how their music might change the world in addition to inward-focused abilities (such as technical training).

What qualities should I seek in a music school?

How many music schools are in the United States?

In the United States, there are 4,634 higher education institutions. There are 1,795 degree-granting music programs among these universities.

Is Juilliard a good investment?

What does it mean when a music school is labeled a conservatory?

In music, a conservatory is a school for musical performance and composition. The phrase and institution are derived from the Italian word “conservatorio,” which referred to a form of orphanage typically associated with a hospital during the Renaissance period and earlier (hence the term ospedale also applied to such institutions).