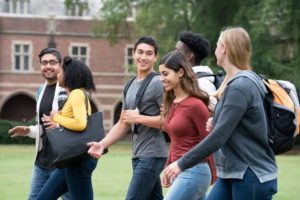 The Universities in this post are judged based on the criteria of cost of Living, accommodation, tuition Fees, best Universities, Good Government policies for International Students, etc.

So, grab a seat, relax and take your time and go through this article, the Xscholarship has provided every detail you need to know about Birmingham and the Cheapest Universities in Birmingham.

Birmingham is considered to be the social, cultural, financial, and commercial centre of both the East and West Midlands. Based on the 2011 UK Census, Birmingham’s population is projected to reach 1,160,100 by 2022, an increase of 8.0%. This compares with an estimated rate of 9.1% for the previous decade.

Below are the List Of The Cheapest Universities In Birmingham

The tuition plan for the University of Birmingham is divided into different bands. Band A consists of clinical subjects. The tuition fee for international undergraduate students is £28,100 per year.

Birmingham City University was initially established in 1871 at Birmingham College of Art and is located in Birmingham, United Kingdom. It is the third-largest university in Birmingham city. In 1971, it gained its name as City of Birmingham Polytechnic.

Finally, in 1992 it got the status of the university and was named Birmingham City University. It is one of the cheapest universities present in Birmingham. It is basically a public university offering a wide range of undergraduate and postgraduate subjects.

For undergraduate international students, the tuition fee for standard courses is £10,100 per year. For more information please check the link given below.

There is a wide range of courses available at Newman University. There are about 3,110 students studying here.

The tuition fee per academic year for all international students is £8,900. For more information on fee please check the link given below http://www.newman.ac.uk/study/2813/international-student-fees

It has been ranked as one of the largest universities present in Birmingham. Almost all courses at this university are available at reasonable and cheap tuition fees for international students. There are about 10,900 students studying here.

ALSO CHECK OUT:  The Top 15 Best Colleges for Zoology

For postgraduate students, the tuition fee is from £14,450 to £16,375 per year. For more details check the official website of this institution at http://www1.aston.ac.uk/international-students/finance/

If you have plans to study in the United kingdom, you should consider any of these 4 cheapest universities in Birmingham, UK. You should decide and consider getting admission in the Most Affordable Universities in the Birmingham United Kingdom that the tuition fees are affordable.