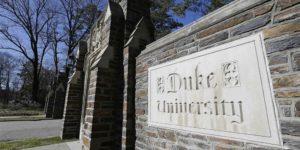 In America, Duke University is one of the universities with great opportunities to offer to students. In this post, Xscholarship has detailed everything you need to know about Duke University, how to study at Duke University 2022, admission requirements, tuition fees, majors and minors programs, scholarships, courses, and ranking.

Duke University has academic affiliations with AAU, COFHE, 568 Group, URA, CDIO, ORAU, NAICU, IAMSCU, and Sporting affiliations with NCAA Division I FBS – ACC. It has a Suburban/Urban Campus and an official website at www.duke.edu.

Duke is often ranked among the world’s best universities and holds the top-ten position in various national rankings. This makes it the more reason applicants should Study at Duke University. In 2017, Forbes listed Duke among the top ten universities to “produce the most Forbes 400 billionaires” and the university is ranked 7th in the world on the Forbes magazine list of ‘power factories.

According to a study carried out by The New York Times, Duke’s graduates are shown to be the most sought-after and valued graduates in the world. As of 2017, 11 Nobel laureates and 3 Turing Award winners have been affiliated with the university.

Duke is ranked fifth among national universities to have produced Rhodes, Marshall, Truman, Goldwater, and Udall Scholars. This serves as an edge for foreign nationals to study at Duke University in 2022 for a conducive environment for learning.

Duke University is ranked fourth globally in terms of primary affiliations. Admission to Duke according to U.S. News & World Report is the “most selective” and according to The Huffington Post, Duke is one of the ten toughest universities in the United States to get into.

Students who want to study at Duke University in 2022 can pursue a major, and also pursue a combination of a total of up to three including minors, certificates, and/or a second major. Twenty-four certificate programs also are available.

Duke University is ranked fourth globally in terms of primary affiliations. Admission to Duke according to U.S. News & World Report is the “most selective” and according to The Huffington Post, Duke is one of the ten toughest universities in the United States to get into. From 2001 to 2011, Duke University had the sixth-highest number of Fulbright, Rhodes, Truman, and Goldwater scholarships in the nation among private universities.

About 60 merit-based full-tuition scholarships are offered, including the Angier B. Duke Memorial Scholarship, awarded for academic excellence, the Benjamin N. Duke Scholarship awarded for community service, and the Robertson Scholars Leadership Program, a joint scholarship and leadership development program granting full student privileges at both Duke and UNC-Chapel Hill.

Duke University has an Acceptance Rate of 10.8%, an elite Admission Standard, and a very high Applicant Competition. Academically, Duke University has exceptionally high requirements for admission test scores, generally admitting students who score in the top 4 percent. Last year, 3,430 out of 31,671 applicants were admitted, of which 50% enrolled.

The Duke University Admission is also open to all Aspiring foreigners.

Duke University typically requires applicants to be in the top 3 percent of the SAT test. The school consistently takes SAT composite scores down to 1430 on a 1600 scale, the estimated average SAT composite for admitted freshmen is 1505 out of 1600.

Also, admission data indicates that Duke University regularly accepts students with ACT scores of 31 and above. Applicants submitting an ACT composite of 32 and above have very competitive chances. The Tuition Fees at Duke University are about $53,744.

Duke University offers 53 majors, 52 minors, and 23 certificates. With the ability to create combinations of the three, you have 437,989 unique academic combinations available. Students have to declare a major by the end of their fourth semester to create their own major (through Program II).

One major is required for graduation, and most students take advantage of Duke’s curricular flexibility to pursue a second major, minor(s), or certificate(s) in addition to their declared major as the Duke University Admission is basically open for all foreign nationals.

The Majors offered at Duke University include:

The Minors offered at Duke University include:

The certificate programs that are offered to students who study at Duke University 2019 include;