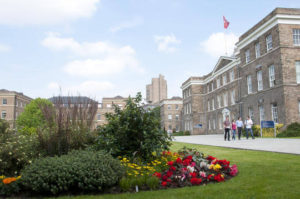 The University of Leicester is a public research university based in Leicester, England. The university’s predecessor (University College, Leicester) gained university status in 1957. The main campus is south of the city center, adjacent to Victoria Park.

In 2016/17, the university had an income of £302.8 million, of which £52.2 million was from research grants. Leicester university received media attention for the discovery of genetic fingerprinting and contributed to the discovery and identification of the remains of King Richard III.

Leicester university’s academic schools and departments are organized into colleges. In August 2015, the colleges were further restructured with the merging of Social Sciences and Arts, Humanities and Law to give the following structure:

The School of Law is one of the biggest departments in the university. According to the Times Online Good University Guide 2009, the Faculty of Law was ranked 8th, out of 87 institutions, making it one of the top law schools in the country.

The large medical school, Leicester Medical School, was opened in 1971. The school was formerly in partnership with the University of Warwick, and the Leicester-Warwick medical school proved to be a success in helping Leicester expand, and Warwick establish. The partnership ended its course towards the end of 2006 and the medical schools became autonomous institutions within their respective universities

The college has the following academic schools:

The research departments and institutes:

Leicester Law School is one of the best law schools in the country. it offers the best in undergraduate LLB and postgraduate LLM courses.

ALSO CHECK OUT:  Rhodes Trust Scholarships for African Students at University of Oxford 2022

Scholarships are for within the Leicester Law School. Offers are available to pursue the undergraduate program.

Leicester Law School is offering a tuition fee reduction of 10% to all Canadian and Malaysian undergraduate students commencing studies at the School in 2022. This will be deducted from each year of academic study.

The Scholarship is hosted in the United Kingdom.

Canadian and Malaysian students are eligible to apply for this scholarship.

To be eligible for this scholarship you must meet the following requirements:

Applicants whose first language is not English are to provide evidence of proficiency in English at a higher level by the University.

The scholarships are in the form of a reduction in tuition fees payable.

Where a scholarship is to a candidate who is also eligible for a fee discount, the discount will be after the scholarship reduction to the tuition fees payable has been made.

Scholarships are only available for students studying on a full-time basis.

Applicants whose first language is not English are to provide evidence of proficiency in English at a higher level by the University.

Three of these scholarships are being offered as ‘Early Bird Canadian Excellence Scholarships’. Early applicants are invited to apply before 12.00 pm (GMT) on Friday 31 January 2022.

Applicants that apply after the early bird deadline will be considered for the remaining scholarships. The deadline for applications is 12.00 pm (GMT) on Friday 15 May 2022.

Students can submit their application form and transcript in one of the following three ways by fax, e-mail, and also by post.

You can begin the application by clicking on the Scholarship Link